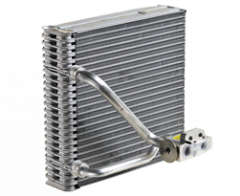 The outdoor air cools down as it passes through the fins of the evaporator and transfers its heat to the refrigerant. The cool air is then blown into the cabin at temperatures of between 2°C and 10°C. Air conditioning is often thought of as a means of cooling down the air, but one of its most important roles is to dehumidify the air. In cold weather, it is important to reduce the humidity levels in the cabin.

Several occupants will quickly produce mist on the vehicle’s windows. Evacuation of condensates air moisture can be extracted effectively by a process of condensation on the evaporator fins. The condensates (water) are then collected and evacuated beneath the car. Valeo Info: The evaporator must be replaced if it is clogged, pierced or contaminated with persistent mould.

The most common problems with evaporators are:

Subscribe to Valeo Service newsletter to receive exclusive offers and the latest news on your products and services.

By signing up your email address above, you agree to receive electronically our commercial offers. You can unsubscribe at any time by changing your settings on your account and through unsubscribe links.